Every cellular system digital or analog is comprised of four parts.

3 ) System operator and its local office 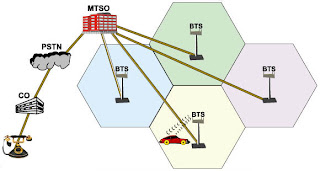 The heart of the system is made up of individual radio coverage areas called ” cells. ” Each cell is a self-contained calling area. Within the cell, a cell site is strategically positioned as a base station for receiving, sending and routing the radio signals of cellular Set calls. Because the cellular system is a radio system, no exact boundary can be drawn on a map. In most cases calls can be place and received throughout the service area, except for certain enclosed areas such as underground parking garages. The No Svc ( No Service ) indicator will illuminate on the cellular Set when in one of those areas or is outside of the service area. The cell site’s transmitter is low powered and does not reach much beyond that cell’s boundaries. That makes it possible to reuse channels ( frequencies ) - a given channel can be used at the same time in different cells, as long as the cells do not border one another, without causing signal interference. This is particularly valuable in urban areas where lots of cellular Sets are in use at the same time. All cell sites are connected to the Mobile Tele Set Switching Office ( MTSO ), which provides connection into the Public Switched Tele Set network ( PSTN ) - the local teleSet company. The MTSO also provides other central functions, including call processing, traffic management, and transferring calls as a

Making a Call
When a cellular user makes a call from a cellular Set, radio signals are transmitted to the cell site. The cell site alerts the Mobile Tele Set Switching Office ( MTSO ) switching station. The MTSO, in turn, provides an open channel ( frequency ) and connects the call to the Public Switched Tele Set Network ( PSTN ). The PSTN put the call through to the number to be reached. This process takes the same amount of time that it takes to make a call from a land line

Receiving a Call
These are the steps that occur when you receive a call on a cellular Set. A call placed to a cellular Set may come from either a land line Set or another cellular Set. Whichever the source, the MTSO is notified that a call has been placed to a specific cellular tele Set number. At this point, the MTSO searches for the correct cellular Set by sending out data over the radio waves. Cellular Sets that are in standby mode ( i.e., turned on but not being used in a call ) continuously scan the radio waves being transmitted by the MSTO. If a Set ” hears ” its teleSet number, it sends back a signal that informs the closest cell site of its Electronic Serial Number ( ESN ) and its teleSet number ( Mobile Identification Number or MIN ). The cell site passes this information to the MTSO, where the ESN and MIN are verified and a channel ( frequency ) is assigned for the call. The cellular Set receives the message directing it to tune to the correct voice channel. The cell site makes the voice channel available, and the call is completed.

Hand-off
Hand-off is the transfer of a call from one cell site to another as the cellular Set moves through the service coverage area. The cell site warns the MSTO that the mobile’s signal strength is falling below a predetermined level. The MTSO then alerts all cell sites bordering on the first one. They measure the mobile’s transmitting signal and report back to the MTSO. The MTSO, which is programmed to select the site receiving the strongest signal, then switches the call from the weak cell to the strongest cell without interrupting the call. The whole process takes a fraction of a second, and the caller usually is unaware of it. Such hand-offs may occur several times during a single conversation as the caller moves through the coverage area.

Roaming
Roaming is a service offered by most cellular service providers that allows subscribers to use cellular service while traveling outside their home service area. When they are outside their home service area and come within range of another cellular system, the ROAM indicator on the cellular Set will light to show that they are in range. Typically there are two cellular system operators serving a specific area. One is a wireline ( local Set company ) and the other is non-wireline. When starting cellular tele Set service, subscribers are assigned to one or the other. When they roam ( operate outside their home system ), their cellular Set will seek service from the same type of cellular system as the one they subscribe to at home. But if that type is not available where they are roaming, the Set will try to obtain service from the non-home-type system. A blinking light indicates a non-home-type system. There is an extra charge for calls placed while roaming.

For More Information Continue Visit on http://buntygsm.blogspot.com More Use full Information Coming Soon. Wait For More New Information.
And Post Your Comments In All Post.